It was on the 2nd. of February 1853 that the Bishop of Worcester came to Charlecote to dedicate the new church. 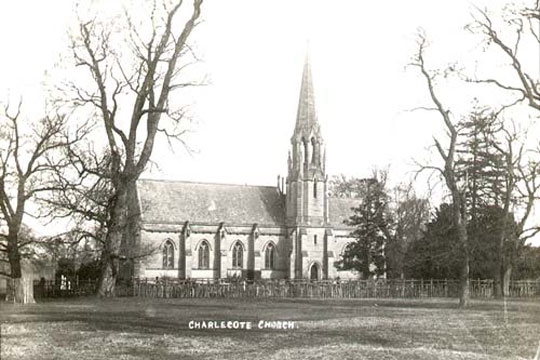 There had been a church on the site since about 1187. Before the dissolution of Thelsford Priory the church in Charlecote had been of little consequence and all the Lucy family had been buried at the priory, but after the priory had been pulled down and its yearly income of 12 shillings and thruppence transferred to the occupant of Charlecote Vicarage, the Rev.Richarde Southame, the village church became more important. In 1585 Richarde Southame wrote that he had no glebe, just tythes of wool, lambs and hay. He did have a two-bay barn at the Vicarage for his own hay, so presumably there was a little land adjoining it. Surprisingly, he disclaimed all education, something which one might have thought necessary for a priest, however small his living.

From the end of the 16th century the small Norman church began to be graced, indeed filled, with some very handsome tombs. Lady Joyce Lucy died in 1595 and her effigy was placed in the church. Five years later when her husband Sir Thomas died his effigy was added to hers. On the front panels the figures of a son and a daughter kneel, carved in high relief, perhaps by Gerard Johnson.

Only five years later the second Sir Thomas Lucy died; by then he had fourteen children. His recumbent figure was originally brightly painted. His second wife, Constance, who erected the tomb, kneels in deepest mourning, her black robes in classic Tudor style, must have contrasted sharply with Sir Thomas’ fine colours. In front of Constance kneel the daughters and behind her the sons, all of them in black. The tomb has no attribution but is considered to be of Southwark workmanship.

Tomb of Sir Thomas Lucy and his wife Alice

The third and largest tomb is that of the third Sir Thomas Lucy and his beautiful wife, Alice. It is in Carrara marble and was at one time attributed to Bernini – a not unsurprising attribution in view of the very fine workmanship and a reference to Bernini in correspondence. However, it is now known that a German sculptor called Shurman was responsible. The tomb depicts Sir Thomas half reclining, resting on one arm, with the books of Horace, Homer Virgil and Cato at his elbow. A small figure on horseback makes reference to sir Thomas’ prowess as a horseman. His wife lies beside him, her dress flowing in graceful folds, her head resting on a finely embroidered pillow. This tomb alone stands 15 feet tall and with the other two tombs fitted in as well it is not surprising that Mary Elizabeth found the little Norman church crowded, small, dark and boxy, used as she had been as a girl to St.Asaph’s Cathedral in Wales.

When George Lucy died in 1845, after twenty two years of happy married life Mary Elizabeth was heart-broken by this “irreparable loss.” It was an era of religious revival and in many places old churches were being pulled down and replaced by bigger ones, often in the Victorian Gothic style. Mary Elizabeth determined to do this in Charlecote, glorifying God and perpetuating the memory of her husband. Mary Elizabeth’s grand concept was brought into being through the architect John Gibson. “He caught all my ideas and embodied them” she wrote. She laid the foundation stone on the fifth of April 1850 and in less than three years the building had been completed.

The stained glass windows are a striking feature of the church and were created by some of the leading artists of the time. Thomas Willement who was heraldic artist to George IV and a Fellow of the Royal Society of Arts, designed the east window which depicts the resurrected Christ and the four Evangelists. Mary Elizabeth’s son Spencer gave this window. Willement also designed the circular window in the Lucy Chapel, a side chapel on the north where the Lucy tombs are now situated. With so many references to the family’s coat of arms it is no surprise that the design came from the hand of a heraldic artist. Mary Elizabeth’s daughter Caroline gave the circular west window, designed by O’Connor. Other members of the family gave windows in the nave and the architect gave the Peter and Paul window in the south wall of the chancel.

The wonderfully ornate font was designed by John Gibson and was the gift of Lord and Lady Willoughby-de-Broke of Compton Verney, the latter being Mary Elizabeth’s sister. The old Norman font has been placed in the Lucy Chapel. 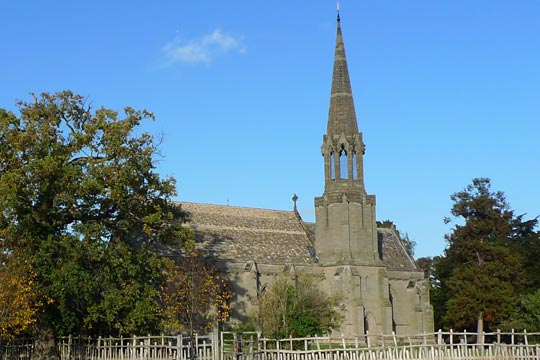 St. Leonard's in 2011 with its recently restored roof.

The woodwork in the church was also designed by Gibson and executed by Davis of Taunton. Apart from a little imported oak in the chancel, all the carved oak was grown on the Charlecote estate.

The two bells date from the 17th. century and were forged by William Bagley; these bells originally hung in the Norman church.

A door in the north wall of the church gives access to a stone staircase which leads to the gallery. Originally this gallery was for the school children, but only a year after the dedication of the church a pipe organ, paid for by public subscription, was installed in the gallery. The names of the donors are inscribed on the two small doors which close across the manuals. We have no way of knowing what the people of Charlecote felt as they got used to their new church but certainly, today’s visitors love it, delighting in its beauty and the opportunity it gives for a moment of tranquility and reflection in the hurly-burly of life.